One Love, One Life, One Need in the Night 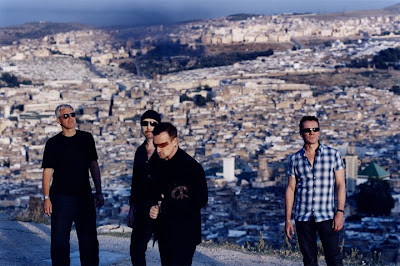 I contribute, and give credit to, the hand of God for bringing Jonathan and I together during our early years of college. I also might credit Bono. Don’t call me a heathen. God can work through people, right?

My love for U2 stems from my Dad, who would play their songs at a loud volume on Saturdays when he did yard work. It became a soundtrack on family drives back from Mammoth. Me, the ever contemplative one, would sit with my head turned back to the looming Mammoth Mountain as we began our descent down the hill towards Bishop. U2 would sing their soft melodies as I was sappily thinking about growing older. Even as a nine year old I was probably already conjuring up this blog post (note: sarcasm).
Back to my love story. Our sophomore year at Westmont (in the fall month’s leading up to Winter Formal, in the midst of Old Testament tutoring sessions and watching Home Alone…stop laughing, God works in mysterious ways okay?), Jonathan and I discovered our mutual love for one of the biggest bands of all time: U2. Together with our friend Rob Hughes, we bought three tickets for their All That You Can’t Leave Behind tour. At the last minute, Rob backed out. I remember panicking. An entire afternoon and evening, alone, in a car, with Jonathan. Was this a date?
If it was a date, I made a horrible one. We sat in pouring rain and traffic for four hours as we inched from Santa Barbara to the Staples Center. I think I made us stop three times to use the bathroom. Jonathan was blunt every time that my stops were not in his travel plan. We grabbed In-N-Out, scooted in at the last minute, and settled into the arena for the show of a lifetime.
I believe this one single night may have sealed the deal for two friends who’d eventually become lovers. The lights dimmed, the lighters came out, the roar overtook the room, and we couldn’t help but give each other giddy smiles the entire night. It was just weeks after September 11th, and in honor of that day U2 played “One” with a backdrop of every single name of every single victim who died that day.
Afterwards, the rain had stopped. We got into my Pontiac Sunbird, put the top down, blasted U2 and the heater, and sped up the coast back to Santa Barbara. Nothing has really been the same since. Well, except for the fact that we’re still buying U2 tickets. In six months we’ll be concert goers again along with 90,000 other fans (and, ironically, Rob and his wife) as we see U2 present their only California concert at the Rose Bowl. Can it get any better than that?
You can expect a full blog report immediately following the night. And, if you’re like my husband and you think this posting was simply to brag that we got tickets, you’re wrong! Sorta.
p.s. If you’re going to this concert, leave me a comment. I’m already planning a tailgate party.

Friends who became lovers! Oh my!! I'll admit that I don't quite understand the U2 craziness, but I love how you two (pun intended) love it together!

ha ha ha! Lori you are hilarious! No, Bono did not set us up on a NCTO so I give full credit to you instead of Jesus or him. All I require is that the next time I see you, you'll sing a gospel choir rendition of Still Haven't Found What I'm Looking For to Jonathan and I while we slow dance.Also, please plan on bringing your Chinese Chicken Salad as contribution. :)

um, credit where credits due...did Bono set you two up on a NCTO?! ...Just kidding. I love that story and I can't believe I forgot about your pontiac sunbird until i read this post. Can't wait to tail gate with you and the Hughes!

I loved this. God works in mysterious ways. ;)I also was probably formulating blog posts at a very young age without even knowing what I was doing. it comes in handy now.