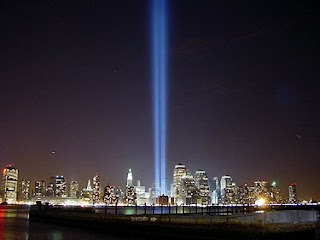 We all remember where we were on September 11, when we heard the news for the first time or saw the image of burning buildings on the television.
I was on my way to a hike, and had stopped briefly in the Dining Commons to grab a bagel. I was running late to meet a girl in my class would drive us to the trail head, where we had been instructed to meet the rest of our class. Our professor had planned a themed discussion that day centered around the book we’d just finished, Into Thin Air. Hiking a Montecito mountain wasn’t equivalent to Everest, but I appreciated her creativity.
Until I found myself on a mountain when thousands of people were dying.
I remember swiping my card at the door, not paying attention to the line forming behind me as I stopped and just stared at the TV screen like my eyes were kidding me. I’d never been to New York. Didn’t know what the World Trade Towers even were. But there is no questioning two mysterious plane crashes and two burning buildings. Something was very, very wrong.
We hiked the mountain that morning. We were all numb. No one knew what that day would mean in history. No one knew that buildings were falling, and horror was happening, and life wouldn’t be the same. No one understood back at campus either. Classes were still happening and teachers said, “We can’t act like life doesn’t go on.” And, it did. Very quickly. Oh, a few posters and flags lingered around Montecito with a name or two of missing victims. But they came down quickly enough, and with no TV in our room and no newspaper… we did move on.
But that doesn’t mean we should forget. That doesn’t mean we shouldn’t remember. It doesn’t mean my heart didn’t hurt a little today when I rode past the fire station and saw their FDNY banner, and the few bouquets of flowers underneath. Because today, thousands and thousands of family and friends of more than 3,000 victims are reflecting on a lifetime of memories, and years of potential, all lost in a holy war that came down on our soil.
So, today…just remember.

after reading your story I thought back to my experience that day. Such surreal memories.

So interesting to read your story of your experience and how different it was from mine, although we were on the same college campus.