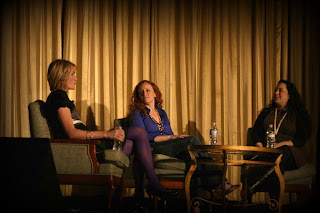 Last weekend I was introduced to something—actually someone—who it seemed like everyone else knew about but me. It’d be like not knowing who David Beckham is if you’re a soccer fan, or who Miley Cyrus is if you’re a fourteen year old. It’s like when I realized all my friends were wearing Bare Essentuals make-up and I was the only one who wasn’t. And then I discovered how glorious it made my skin feel and I was thankful to have women in my life who gave me such advice.

New discovery? Her name is Dooce. Well, Heather Armstrong actually. But people call her Dooce. She’s the blogger of all female bloggers, a high ranking statistic on Technorati, and she’s 5’11” which means she’s gotta be somewhat cool (That’s her on the far left).
She blogs about her life—which is like me—except for she has probably thousands upon thousands of more readers than I do. Maybe millions. I could go check Technorati and find out but that would be too much work right now.
So, Dooce…thanks for your closing keynote at Blogher. My friends were sorta drooling about you being there but don’t tell them I told you. And don’t worry—we got your back with that creepy girl. What was her deal anyway? Sheeeeeezzzzzz…..

I just heard about this Armstrong gal about a week ago (before I read this post). It was a story on yahoo and they well talking about mommyblogging, that is a way to make money for stay at homes moms. I guess this Heather get fired from her job years ago because she talked about her coworkers on her blog, and now she makes a ton of money. Talk about turning lemons into lemonade...

he he he...i know!! you are all going to hate me. I'll need to post something about why i hate my feet (which will gross everyone out) so that you all don't get mad at me.And yes, I have been reading dooce.

shhhhh! lesley! you might get kicked out of the friendship club if you spill any more secrets.

you are blowing my refined play-it-cool cover. did you start reading dooce?