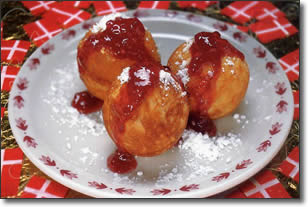 I just watched an infomercial that made me incredibly angry. Yes, you heard me. An infomercial made me ANGRY. Livid actually.

The culprit: http://www.pancakepuff.com/.
Background: My grandpa has always made us Aebleskivers, which are delicious little danish pancakes, cooked in a special cast iron pan. I used to think we were the only people in the world to eat these little treats, which can be served with jam, apple sauce, powdered sugar, or whatever else you prefer. I love our memories eating Aebleskivers in Mammoth, looking out at the meadow covered in snow. When I worked at BigSpeak, my friend Jen told me her family also eats Aebleskivers, and has since she was very little. One morning, we made an Aebleskiver feast for our whole office. It was a very, very blessed day.
Too bad some stupid person is trying to market the Aebleskiver as an American “Pancake Puff”.
Grrrrrrrrrrrr. Can’t they at least come up with a better name than Pancake Puff?!?!

there is this little danish restaurant in visalia that we would ditch third period on fridays to go to... just for the aebleskivers! that place is off the hook.