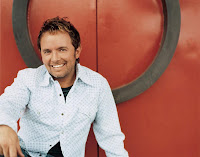 Some days on my way home from work, when the traffic is especially bad and I’m anxious for the weekend to start, I let my imagination really go. I talk out loud. I use my hands. I even occasionally move my hair over my ear so that I can trick other drivers into thinking I’m on one of those sweet ear pieces. What are those called? Wireless?

My imagination really went into full force last month when one of my dearest friends sent all of us girls a mass e-mail that went something like this: “Kathy Ireland wants to set me up on a date this Thursday night with Chris Tomlin. You know, the Christian music artist. I wonder what I should wear?” The e-mail was a lot longer and of course went into more details as to how such a thing might come about, because it’s not everyday that ordinary people like us get set up on dates with famous people. Granted, if you aren’t a Christian, you probably could care less who Chris Tomlin is, but, he’s big time. And he’s got a great voice, some incredibly powerful songs and (after I googled him to check) he’s good looking.

Now, some might find it odd that I haven’t mentioned anything about Kathy Ireland being the one to set up such a date. I found it really funny that Erin is friends with a former supermodel and has never mentioned this to me. But that is totally an Erin thing. She just cares about people and doesn’t really get into the whole celebrity fascination. To Erin, Kathy is just another mom of her many students.
Naturally, all of us girls kicked it into high gear– e-mailing Erin about what to wear, what to talk about, and how it would be hilariously funny if she just quietly hummed his songs under her breath the entire night. I, being the imagination machine, began thinking about what I’d say during her wedding toast. Of course, it’s quite presumptuous of me to think that I might someday be asked to give Erin a toast, but it’s a small dream of mine that I’m willing to admit out loud, on the World Wide Web.
So, you can imagine all of our disappointment when the date did not happen. CT ended up delaying his plans to visit Santa Barbara and the date was put on hold, indefinitely. Erin did attend his Los Angeles concert (with Kathy) and said he was very sweet and kind, so I’m still holding out hope that the date will happen.
But one thing that I’ve realized is that even though we’re just “ordinary” people living an “ordinary” life…. Chris is just an ordinary guy too. And Erin is a catch that he’d be lucky to get. If he ever did get her, I’d be all over that toast. I might even throw in a little Chris Tomlin song at the end, just to spice it up.