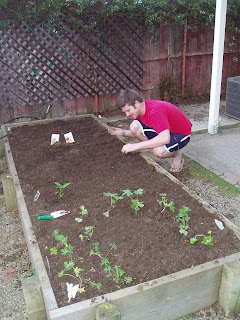 Here is a picture of our new garden! In just a few months, we’ll have two types of tomatoes, eggplant, cucumbers, basil, peppers and flowers. Well, that is if all goes as planned. So far, Jonathan and I have been fighting over who gets to water at the end of the day which is really funny because at first, Jonathan thought I was weird for wanting a garden. If a few of his friends see this picture, he might have to fight back for his manhood. Today we had a big outing to the nursery to buy snail killer. We are such nerds.

Has anyone seen Babel? I rented it today to watch and I’m looking forward to it… I also really recommend the Dixie Chick’s new movie- Shut up and Sing. I like their music a lot, and as much as I don’t particularly agree with all that went down a few years ago, I think its a great example of why we have the freedoms we do. We have the freedom to use our voice- The Chicks used theirs as entertainers and many of their fans responded as consumers. Either way, the documentary is very interesting and has some great music.