The following takes place between 3pm and 4pm 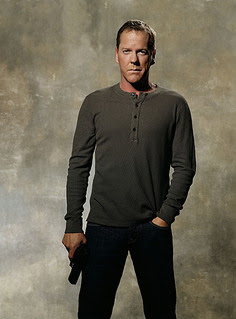 On Friday night, Jonathan and I spent 3.5 hours in front of our TV, jaws clenched and lungs holding, as we watched 5 episodes of 24. Time is running out. We have exactly 5 days left to complete Season 5, before Season 6 premieres on Sunday. Although I do have much bigger things to worry about right now (like, finding a job) 24 is a nice distraction. It takes me back to our China nights (and days) spent in our tiny high rise studio, on the bony futon couch, friends and family and English speakers far, far away. On several occasions, as we dangled noodles from our slippery chopsticks, we’d discuss Nina, Jack and Kim’s wild adventures, as if they were our friends. If you’ve never watched 24, you’re probably concerned right now but I’m going to hold to my belief that it may just be the best show ever to grace prime time tv. So, do yourself a favor. Rent 24 and catch up on everything you’ve been missing. I’ve got to go…I have 8 more episodes to watch…..