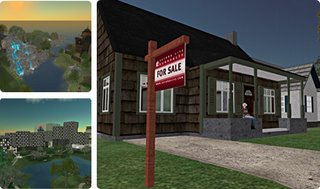 I discovered a website today that gives me a funny feeling in my stomach; a mix of excited butterflies and throw up. The site, called Second Life, is an entirely virtual world where you pay for a membership, and then are able to create an avatar (character) that you name, give features, and use to buy property and have relationships with other avatars. For instance, I could create a woman named Jane, decide to give her brown, short, curly hair and have her fall in love with some other avatar named Tom, who has been created by a weirdo named Larry living in Delaware. Then, we can purchase a honeymoon for our avatars to take together and maybe buy into a nice two bedroom condo. Yes, users pay their OWN MONEY for fake avatar characters to own a piece of property! Weird? Totally. Even weirder that this little game seems kinda fun to me. Its like a big game of make believe Barbie for grownups. But, there’s no way I’m paying $9.95 per month to own a virtual condo. I think I’ll work on the real thing first.

Really though…what has our world come to that we need games like this to keep us entertained? Or has our society really just lost that much touch with the real world?