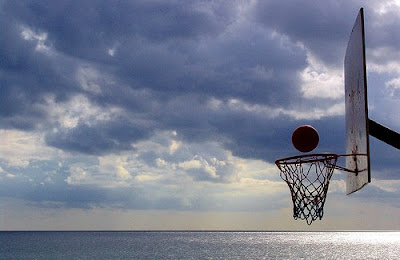 Twas the night before the tournament, and all through Apartment A
One creature was preparing for a very special day.
His brackets were prepared with tenderness and care
With hopes that the crew wouldn’t play dirty, but fair.
The grown men all snuggled up, excitement in their hearts
Ready for a weekend with the dudes– basketball and farts.
His phone wouldn’t stop ringing, and he paced with great worry
The tournament website had too much traffic! Upload your choices, and HURRY!
He called and then emailed and called them again,
Now Nate, and then Rob, and then Kevin and Matt!
Followed by Sam and Jeremiah and Paul and then Brett!
I hadn’t seen him this thrilled since maybe our wedding day…
All because college basketball players were preparing to play.
“To Santa Barbara we will go,” he yelled with passion in his eyes!
“Don’t worry about school, or work, or even your wives!”
So, off he goes this weekend for never ending basketball and beer
I’ll stay with my blog and make fun of him from here.

Oh my Sissy! You are quite the clever poet. I love it!!!

I love this. So funny!

You? Are brilliant. I? will be surrounded by dudes and farts all weekend.

Excellent poem Lesley! To bad you are not in my English class because we are just ending our poetry unit.