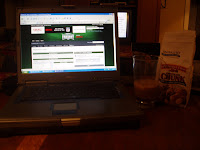 It’s football season. Do you know where your husband/boyfriend/dad/roommate/brother/grandfather is?

If you don’t– I have a suggestion. Check the TV and the computer. You’ll find him without a problem.
And me? Well…you’ll find me there as well. Along with 15 other lovely women, I’m joining the Fantasy trend this week as the Rockford Peaches kick off our season tomorrow.
I’ve posted a picture of what my desk looked like last night, at around midnight, when I was finishing drafting my players. As you can see, cookies and iced chai really got me through the night, which ended up being quite stressful. You see, I developed a precise method for deciding how to choose my players. First, I looked at ESPN’s rankings. Then, I chose names I recognized, or names that I thought were cool. Like Jericho Cotchery. Who wouldn’t want a guy named Jericho!?! Right? It’s biblical! I also wanted to get as much diversity as possible since that’s the PC thing to do, and I wanted to make sure my players were as good looking as possible so I googled all of their pictures before ranking. If I’m going to be staring at them on TV for the next three months then I don’t want to be seeing dreadlocks or gold teeth. And that’s final!
Sadly, I only got some of my top picks. Matt Hasselbeck and Jericho Cotchery are two of my favorites. I’m pretty angry though because I lost TJ Houshmenzadeh to Lori. I really, really wanted TJ just to make Hach really angry that I got the only half Persian guy in the NFL. We’ll see if I can get him in a trade. Lor? Possible?

is it sad that i'm going to root against my own QB this weekend? i don't even remember his name because i got him in the 57th round. p.s. hands off my man - if i can't find a smith to marry me, i'm totally going for that guy whose name is so much worse than mine that i can't even spell it right now.

I loved your strategy for picks lesley, except that you blew up your whole team and got matt hasslesack. what a disaster. but not as big a disaster as Anna picking JAMAL LEWIS in the first round. the guy is literally bussed in from a retirement home for the games. YIKES! (will ferrell voice) good luck this year, i hope to god you win yours and miller gets slaughtered. i mean, that he does well too.

I never thought my heart would be so happy to talk about football with other women. :) We are in for an incredible season.

I'm pretty stoked that I got Frank Gore (RB) from San Francisco, because 1.) HE'S A NINER, and 2.) Shane also has him on his fantasy team which means we'll be rooting for the niners together all season. Purrrrrfect! My 1st round pick, Jamal Lewis, just had some kind of hamstring blowout, though, so that blows.I'm so glad you're putting your back into this. We are going to have such a fun season! Go Peaches! But mostly, go Badger Dogs! (That what dachshund means, BTW)

you aren't that bad off! apparently i need a new quarterback and tight end. that's just great.