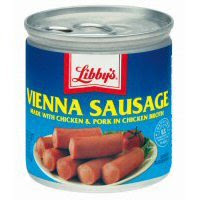 I was too horrified to pay attention to his name. I’ll say, Howard?

I’d seen him swirling his fingers through a small can of Libby’s Vienna Sausage, eating the tiny wieners bite by bite. Gross.

Howard sat down next to me at the bus stop. Right next to me.

“Hi,” I say suspiciously. He looks 70 so I’m not too concerned.
“Hellooooo young lady,” he says. I start fiddling with my Blackberry to try and avoid conversation. He pays no attention and starts talking.

“What brings you here today?” I’m trying to be polite.
“Well. I’m on my way back from the doctor’s office and turns out that I got chicken pox!”
“Wow. Well don’t touch me okay? Chicken pox aren’t fun,” I say this with a little laugh but anyone in their right mind would understand that I’m not joking. Who wants to get chicken pox from a random stranger at the bus stop?

We chat for awhile. I decide to be nice because he obviously needed a friend. Apparently, my polite questions were taken as something more than just polite questions because before I knew it, Howard was asking me if I liked Vienna sausages and if I’d like a can of his. Afterall, they were on sale this week at Longs. Two for $1.

I take the yucky can of sausages and try to barely touch the can before quickly setting them on the seat next to me.

I put the stupid sausages in my purse as the bus rolls up. Howard grabs my hand goodbye and all I can think of is shingles and sores and itchy milk baths. I wave goodbye and hold my hand away from the rest of my body the entire way home.

Seriously? AhhMazing. I had a friend in elementary school named Cheryl Lutz who literally sustained life on Vienna Sausages. And usually, you can't get the pox for a second time. Unless, the first time you got them, you got less than 30 sores. Then you are susceptible.

Lesley, This blog & the string of comments was fun to read. Don't ever be ashamed of being too kind. But it is hard to figure out the line between kind & safe isn't it? Thats why I am better at being a small town girl.

i am so glad your mom called you out for loving vienna sausages as a child. and lesley, i think you need to stop encouraging me to make internet friends. little matthew miller is officially very scared of me. also, why would you befriend someone that i have nothing in common with? how cool could he be?

Oh Mom...that video is so sick. So, so sick. Really? How is it even possible that I liked those things as a baby?!?! My world is coming full circle.

Ha ha!! This is very funny! When you were a baby you LOVED Gerbers baby food - Vienna Sausages, which Dad called "fingers", because they look like little baby fingers. If you want to really get grossed out on something concerning Vienna Sausages, watch this U Tube: http://www.youtube.com/watch?v=WDduRnG0du8You'll never open that can after watching this. Love, Mom

best story ever. you and jonathan should make a whole dinner planned around those sausages. and then toast to howard!

Sarah-- you and Kevin would kill each other in about 2.5 seconds. I hope you become internet friends and realize how little you have in common.As for me, I obviously don't know how to not be polite. I just can't do it. For my own safety I could use some tips in not being friendly as it has gotten me in some predicaments in the past (homeless man that I think was stalking me, etc.)As for getting chicken pox again...I thought you couldn't but Harold said he had them before! I'm convinced that man had a rare strain that I'm going to catch. :(

I just want to know how the sausages taste. :) You most likely made his day. Good for you for being polite. You never know how you are impacting the world, one can of sausage at a time. (and you can't get chicken pox again -- good thing).

Drama?Lesley, you are one of my extra nice friends that finds herself in these kinds of situations... If there is a stranger I don't want to talk to, it Doesn't Happen. I know, I know, they could be an angel in disguise and all that. But I will absolutely clam up and put off a don't-say-a-word-to-me-vibe to avoid unwanted conversation. You are a better person than I.

everyone needs to calm down. have you ever had the chicken pox? i would be blow away if you haven't. everyone knows you can't get them again, or at least there's like a 99% chance you can't. and whoever said don't ride the bus, that's like saying don't put yourself in the best place possible to people watch. drama.

LESLEY. I can say this because I rode the bus when I was in Berkeley: STOP RIDING THE BUS. Kill the environment, support gas station owners everywhere, and DRIVE A CAR TO WORK. At the very least, can you be bitchy instead of nice??This is like when I had to tell Erin to stop running because she kept falling.

Shut it! I just LOL'd at this, and you can verify that with Shane and Corinne, with whom I am getting my Olympiad on. Seriously though, at what point were you like, "this is the best blog fodder ever"?