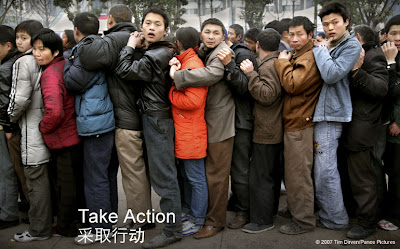 The Summer Games kick off in less than a month, and I’d be lying if I didn’t admit my excitement. The 2004 games in Athens were so fun to watch. Most nights we’d all gather at Jonathan’s house in Goleta with Caleb Rhoads, Justin Dipinto, Reid Spencer, Rob Broadus and a bunch of other fun guys. They would naturally find at least one athlete to make fun of each night while the rest of us rooted for Michael Phelps to break records. This time around, I’m looking forward to all of NBC’s great shots of Beijing, cultural highlights and reliving the two times I’ve been lucky enough to explore this magic city.

However—I will be wearing my “Expose Beijing” headband while watching. (Thank you Sarah Miller for so kindly buying matching ones for Jonathan and I at the Free Tibet Rally in San Francisco. You know the way to my heart.)

Again, in case you haven’t gotten my disapproval in earlier posts, China should not have been giving the honor of hosting such an important international event. If you think I’m over reacting, read just a few of the tidbits in the media this week (courtesy of CNN, Sports Illustrated):

· The Chinese government continues to block and threaten foreign journalists despite repeated promises to lift media freedom restrictions ahead of the Olympic Games, Human Rights Watch said in a new report released today.
· Everyone who comes into the country will be monitored, and dissidents and underground religious followers in other parts of China have either been jailed or banned from leaving their cities during the games to prevent them from staging protests in Beijing.

Human Rights Watch has created an entire website dedicated to the Games, that I highly recommend you visit before the they kick off. Their major concerns include: forced evictions and school closures, labor rights abuses, repression of ethnic minorities, controls on religious freedoms, HIV/AIDS rights advocacy obstruction, use of house arrest system and ties with rights violators.

Take action– write to the IOC President to speak up for those who cannot!