Usually, I keep my blogs happy and cheerful. But the reality is, there are many places in the world where normal people like you and me don’t have the same freedoms that we take for granted daily. Jonathan and I saw Chinese censorship firsthand when we were in the country last year. We often spent hours in smoky internet cafes where hundreds of teens sat playing games and blogging. I too spent hours blogging on Xanga.com, which as of this month is officially inaccessible in China. Hmmm… I hope I didn’t have anything to do with that! Read on and tell me what you think. 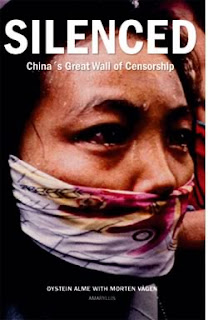 BEIJING: China will intensify controls of the growing numbers of bloggers using the Internet to lay bare their thoughts, politics and even bodies, the country’s chief censor has announced.
The director of China’s General Administration of Press and Publication, Long Xinmin, said the administration was forming rules to further regulate Internet publishing, including the country’s legions of bloggers, The Beijing Morning Post reported Tuesday.

“We must recognize that in an era when the Internet is developing at a breakneck pace, government oversight and control measures and means are facing new tests,” Long told members of China’s national Parliament on Monday, the report said. Long singled out bloggers as one challenge.
Long said “citizens’ freedom of expression would be fully protected.”
But China’s restless blogging population has been a headache for the ruling Communist Party, which has sought to extend longstanding censorship to the country’s fast-growing Internet use.
By last September, the number of blog sites in China reached 34 million, a thirtyfold increase from four years before. Chinese bloggers have detailed their political views, hobbies and grudges online. One pioneer, Mu Zimei, a young journalist, attracted a storm of publicity in 2003 by chronicling — names and all — her complicated love life. Another blogger, calling herself Liu Mangyan, published nude photos of herself. More sober-minded bloggers publish combative investigative journalism and punditry on current affairs.
A number of government authorities would be casting new rules to cover Internet “publishing activities,” Long said.
“The publishing administration authorities have been paying attention to this new mode of Internet dissemination,” Long said.
China does not lack rules controlling the Internet; an army of competing agencies often issue regulations. Last year, for example, the Chinese Ministry of Information Industry issued rules on Internet news content that analysts said were aimed at extending regulations governing licensed news outlets to blogs and Internet-only news sites.

It just seem like this type of censorship could last that long? It's so sad. It makes me feel grateful for the freedoms we have. Continue to share your voice for those who can't.